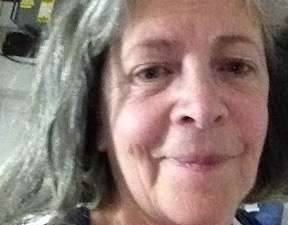 I was born in Dublin, Ireland where from a child I was drawing and painting - mostly on cardboard "canvases" made up from shoe boxes.  I delighted in shape and colour.   However, later in life I became very interested in different ways of making "art" so my artistic background is rather a mix:  some private lessons from a portrait painter in Grafton Street, Dublin....many years ago now and I'm embarrassed not to remember his name!   Then stitching became an interest which lead eventually, when I arrived in England, to studying stitch and textiles from an experimental point of view at Windsor College, eventually gaining a higher diploma with distinction.   Then I dabbled with clay and resin.  To make a long story short......I now have a proper studio in Earlsfield which contains boxes of metal, paint, thread, bits and bobs because I call myself a mixed-media artist - not surprising considering my background!